Demolition of an Agricultural structure in Wad Rahal / Bethlehem governorate

Violation: Demolition of an agricultural facility under claims that it lacks a license.

Sunday, 4th of August 2019, The Israeli occupation bulldozers demolished an agricultural structure, belongs to Jihad Fawaghreh, on the pretext of building without licenses.

The targeted structure is located on a 3.5 dunums plot, it consisted of two rooms built of cement and ceiled with steel sheets.

“The Israeli occupation civil administration served a notice to my nephew, the notice was served only 96 hours before the demolition. Thus, we did not get any chance to object.”

He asserted: “The demolition was carried out at 1:00 pm , and after the demolition, Israeli troops served another notice “announcement on removing a building”. 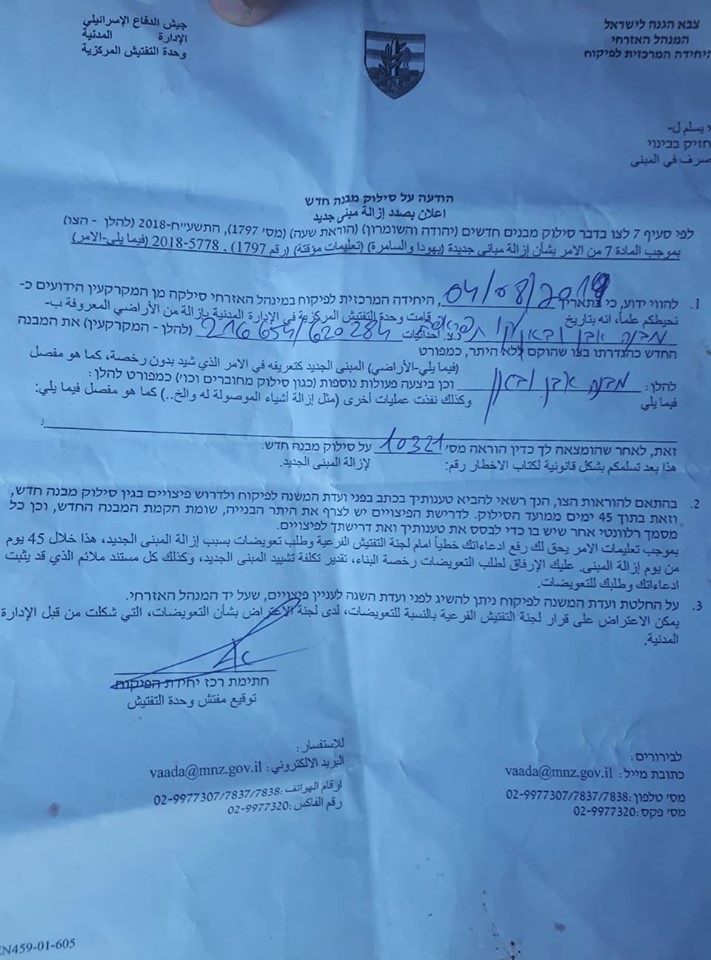 “announcement on removing a building” notice

demolition of an agricultural room in Wad Rahal

The “announcement on removing a building” notice  explained that the structure was demolished because it was unlicensed , and the owner can file an objection within 45 days after the demolition, if he won the case, he may get a  compensation in form of a sum of money.

Apparently, the occupation’s intention is to build a segregation wall in the area . Thus, they put pressure on farmers in the surrounding plots in order to push them away from the area, but farmer Al-Fawaghra remained steadfast and cultivated his land regularly after he rehabilitated it a while ago.

The Israeli occupation human rights violations continue in order to achieve colonial schemes. Reportedly, Settlers of “Efrat” were seen building new units in order to be annexed to “Gush Etzion” settlement cluster and achieve the project of “The greater Jerusalem”. The Israeli government violates international conventions and agreements by occupying the Palestinian territories , tormenting its people, and taking over natural resources.

Oslo accords divided the town as the following: