Demolishing two rooms and a cistern in Al-Burj / South Hebron 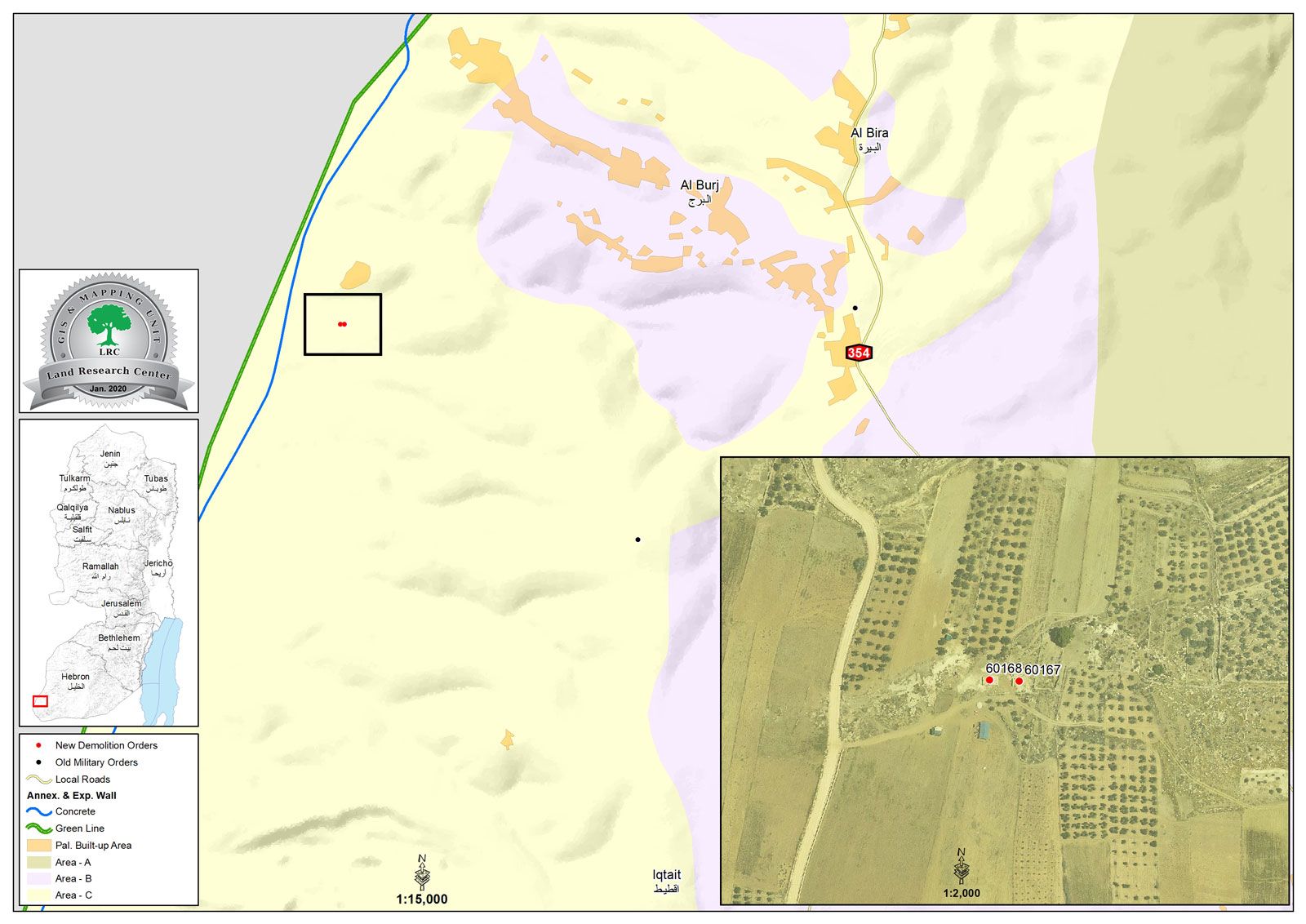 Wednesday, January 8th 2020 , The Israeli occupation authorities demolished two agricultural rooms and a cistern that belong to citizens from Al-Burj south Hebron, on the pretext of building without licenses.

An Eyewitness said that an army force , a vehicle from the building and organization department and a bulldozer , raided the area of Umm Baghla about 8:00 am , circulated the targets , and the bulldozer leveled the structures to the ground.

The targeted facilities belong to :

Farmer Mufeed At-Talahma : the demolished structure is a roofed room that was built in 2017 with  rocks and Mud , it has an area of 16 m2, the owner uses it in summer time during working in his plot , Mufeed is a herder , and herds in the areas postures.

Noteworthy , LRC constructed the targeted rooms in cooperation with CRIC, within “Sumod” project activities , in order to support farmers’ steadfastness in C area.

Moreover, the occupation also destroyed a water harvest cistern, with a storage capacity of 70 m3, the cistern provides water for the cattle during summer time, and it was implemented by Land Research Center in cooperation with the Catholic Relief Services – CRS.

2- Farmer Islam Salama Oudeh Talahma : : the demolished structure is also a roofed room that was built in 2017 , it has an area of 16 m2, the owner uses it in summer time during working in his plot , Islam  is a herder , and herds in the areas postures, LRC constructed the targeted rooms in cooperation with CRIC, within “Sumod” project activities.

In July 21st 2019,  the occupation authorities issued halt of work orders targeting the demolished structures, and set August 8th as the inspection subcommittee- High organization council session to discuss the fate of the structures.

However in December 8th 2019 , the occupation authorities issued final demolition orders on the targeted structures and gave the owners only 7 days to demolish them with their bare hands , the victims did not comply , so the occupation forces showed up in a cold rainy day and implemented the demolition.

It is important to mention that the Annexation and Expansion wall is to the west of “Umm Baghla” area , Rehabilitating the areas roads, and construction of agricultural rooms and cisterns clearly revived the area, which angered the occupation that aspires to keep these lands as a reserve for future colonial expansion, so they started issuing military orders against those structures under illogical pretexts and claims.