HOME » PUBLICATIONS » Notification of evacuating agricultural lands in the village of Al-Mughayer, Ramallah and Al-Bireh Governorate

Notification of evacuating agricultural lands in the village of Al-Mughayer, Ramallah and Al-Bireh Governorate 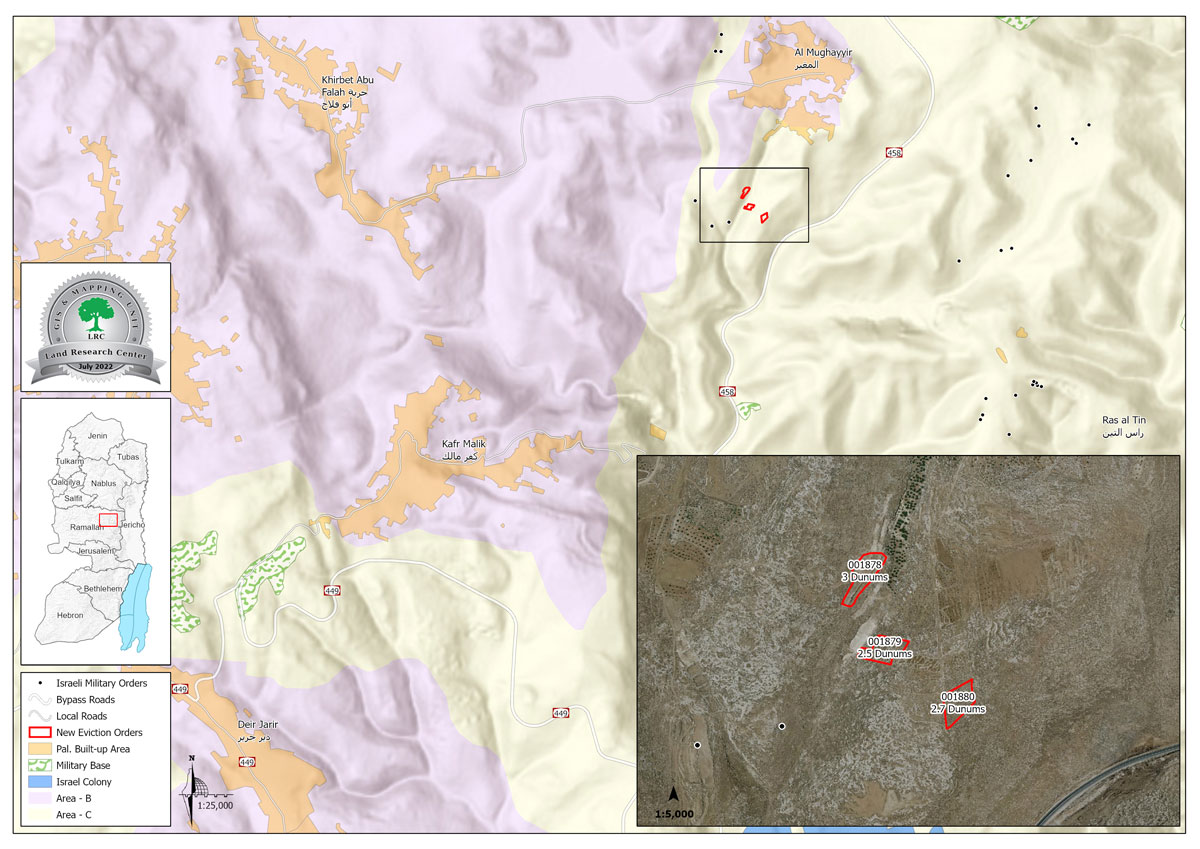 Violation: Notifications of eviction of 8 dunums of land.

The aggressor: the so-called custodian of government property affiliated with the Israeli Civil Administration.

On Thursday morning, June 14, 2022, the so-called “Israeli Civil Administration - responsible for government properties - the Central Inspection Unit” notified for the third time in a row during the current year, the eviction of three agricultural plots in the “Al-Batain” and “Wadi Omar” areas to the southeast from the village of Al-Mughayer is wooded with olives.

It must be added that the military notifications have been placed next to the plots of land, bearing the following numbers: (001878), (001879), (001880). It also includes evacuating the plots and returning them to what they were before within 45 days, under the pretext of assaulting government property (State land) according to the description of the occupation.

The Israeli occupation continues its campaign, which aims to vacate the Shafaghouria agricultural lands located to the south and east of the village of Al-Mughayer, as this comes in conjunction with the establishment of a settlement outposts there and the settlers’ attempt to control the entire area and Judaize it in line with the occupation's vision of imposing Israeli sovereignty on most of the lands in The Jordan Valley and the Shafaghouri areas.

It is noteworthy that the targeted lands were reclaimed three years ago, and the planting trees age ranges between (3-9) years.

In the following table are the names of the owners of the threatened lands and information about them:

“The targeted land belongs to my father and was previously planted with wheat, which was a source of income for our family, but because of the lack of water and that we are prevented by the occupation army, we did not cultivate the land for many years, but we decided to re-cultivate the it three years ago, and today we are surprised by what the occupation has done of emptying the land and controlling it”.

It is noteworthy that the so-called government property inspector affiliated with the occupation raided the neighboring area of Al-Quboun, which belongs to the lands of the village of Al-Mughayer on (22/5/2022) and targeted 141 dunums there through eviction orders for agricultural lands Moreover, on (27/4/2022) a plot of 7 dunums of land was notified of eviction.

Al-Mughir is located 30 km to the north east of Ramallah; it is inhabited by around 3,249 people according to the PCBS statistics conducted in 2017.

Most of the village agricultural fields are located in its eastern parts; its total area is 33055 dunums, 501 of which are built-up area.

The Israeli occupation confiscated 37 dunums of Al-Mughir lands for

According to Oslo Accords, about 95% of the village is under Area C while